Here's some advice for beginners buying a first guitar.

(Check out this article if you have been playing some time, and are interested in buying a second-hand guitar).

Know the different types of guitar, their sounds and the styles that are commonly played on them.

Basically, there are three types of guitar – acoustic, electric and classical.

Acoustic guitar - also called a steel-string or a Western. 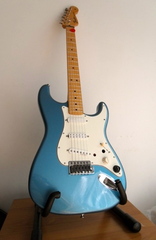 If you buy an electric guitar, you’ll probably want to get an amplifier and a cable to go with it. It is possible to practice on an unamplified electric guitar, and this could be an option for a start if you are on a budget. But, to be louder and to get the real sound of the electric guitar, you’ll need an amp. The amp could be a small one, say 5 or 10 watts, which is ideal for practicing in the home. If you start to play with a band you would need a louder one. 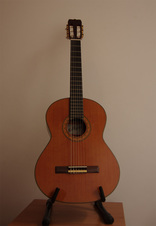 * I play and teach nylon-string guitar, but only for modern styles – Bossa Nova, Jazz, chilled-out pop (Sting, Norah Jones, for example). I’m afraid I don’t have a huge repertoire of classical pieces and I don’t play flamenco guitar at all. I'm sure there are better-suited teachers around than me if you’d like to learn classical or flamenco guitar the traditional way.


Here are a couple of audio examples to help you discern between the different styles and sounds of acoustic and classical guitars:

I don’t believe that any one of the three types of guitar - electric, acoustic or classical - is the best to begin playing. Just go for the type that you personally like the best and that you are motivated to play.


Buy a new guitar from a high street or online store rather than from Ebay or a private seller - it's safer, you stand a better chance of getting a good guitar that plays well. If you don't know a lot about guitars, then buying a second-hand guitar is a lottery!

If buying an acoustic guitar, I suggest you get a 'solid top' (sometimes called 'massif' in French), which sound much better than cheaper guitars which normally have a 'laminate top'. Good brands making solid top acoustics at a decent price (300 to 600 euro) are Seagull, LAG, Yamaha and Sigma.

If buying an electric guitar, then I would recommend getting a Yamaha Pacifica guitar and a Roland Cube practice amp.

I'd also recommend Yamaha as a brand is you are buying a classical guitar. Their quality is about the best around the 300 euro price range in my opinion.

Shopping local vs shopping online??? Ethically, I prefer to shop locally in Brussels, if the price difference between a local store and the mega-internet stores (eg Thomann or Music Store) is not too great. When it is, I'm afraid I think more about my wallet than supporting local business and I shop online.